Deer in the daisies. Birds in the branches. How could such a show be making a radical statement?

Craven is able to recreate the sappiness that draws people to these tchotchkes while at the same time underscoring the fallibility of commercial reproduction. She makes it impossible for viewers to find the original among her reproductions or, by extension, to know why they should value one style of painting over another.
—Barbara Pollock, Artnews

Ann Craven’s images are not taken from nature, but from reproductions of nature, and the mourning inherent therein. Craven’s appeal not only as sweet, but as lurid; they portray beings as flowery, and absurd,
and deeply sympathetic as corpses in caskets. The fact that Craven’s second solo show at Gasser & Grunert is a revisitation upon precisely the same imagery as that of her first show, represents another contextual politicizing of what Art in America’s Anastasia Aukeman called “this weird Craven-Disney world.” Social and personal success in Western capitalism is measured by the perpetual forward march, and Craven’s thematic resolve is a direct assault on assumptions of change and progress. Her focus on themes harkens to periods in art and painting when the school of an artist would continue making work long after that artist’s death, and, in so doing, the artist’s creative influence could maintain and grow in a manner which allowed it to keep up with the day’s ruling families—the then equivalent of present-day conglomerates. Our own cultural obsession with the individual heroism of artist, and their ongoing “breakthroughs,” leaves artists ill-equipped to compete in the higher echelons of the world economy; there is no building on invention, and there is no future for invention. As summarized by Aukeman, “by turns see, ironic and seductive, the works take their place in a Warholian tradition of subversiveness.”

Her nostalgia has to do with the place of nature, and perhaps even of nineteenth-century nature painting, in a world that is becoming more and more like that of Soylent Green. Her heartfelt canvases,
touched by an almost religious reverence for the planet’s flora and fauna, are themselves products of an artificial, digitally enhanced reality.
—Francine Koslow Miller, Artforum

Craven’s relationship to Warhol is not just based in her use of repetition, but in her sourcing of media images specifically associated with death. Warhol’s electric chair, or Marilyn, or crashed Dean Convertible–all relate to Craven’s “Dear”, which is not culled from Bambi, but from the scoff thriller, Soylent Green. Charlton Heston, in a future New York, discovers that the world’s food source is people; the “Dear” image, appearing in a film in the film, is employed to pacify the dying on their way to the dinner plate. Craven, by her friezes, underscores media repetition, and makes a similar assertion: we are nourished by our own deaths.

As in Director Ridley Scott’s android-filled Los Angeles, in which it became impossible to distinguish sentient being from cyborg, viewers are hard-pressed to discern Craven’s sincerity amid her tacky arts-and-crafts color combinations and hokey subject matter. Consider the triptych Hello Hello Hello, three canvases featuring the same bird. Only the slightest differences exist among the pictures, yet these
compositional discrepancies originate in the artist’s gestural brush strokes. Rather than emulating a machine, like so many painters before her, Craven emulates the expressive, sentimental human touch—
much like a bird might mimic language.
—Tim Griffin, Time Out 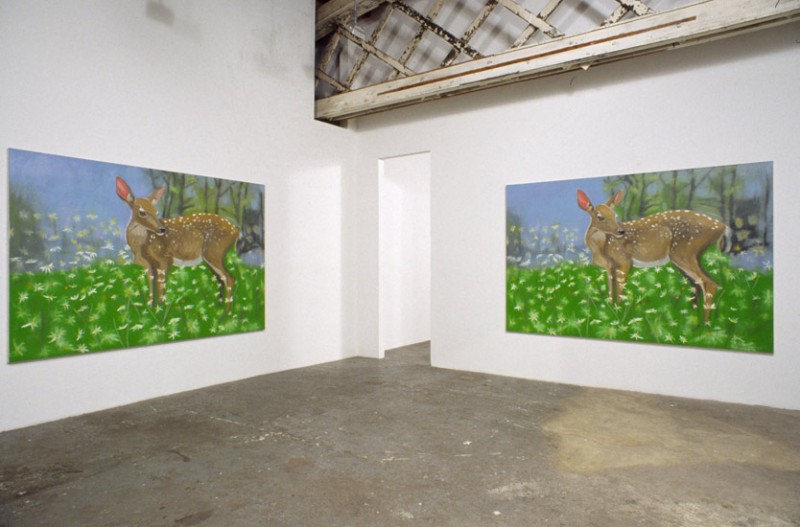 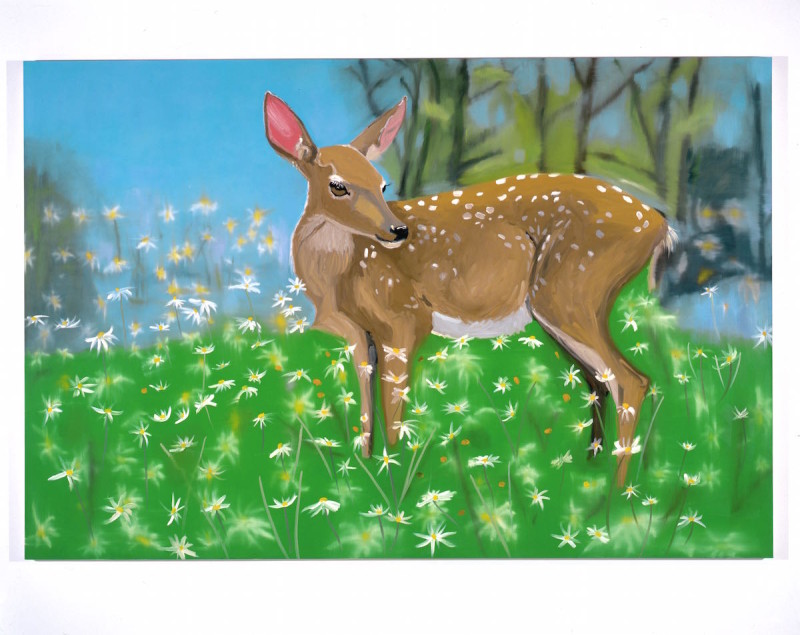 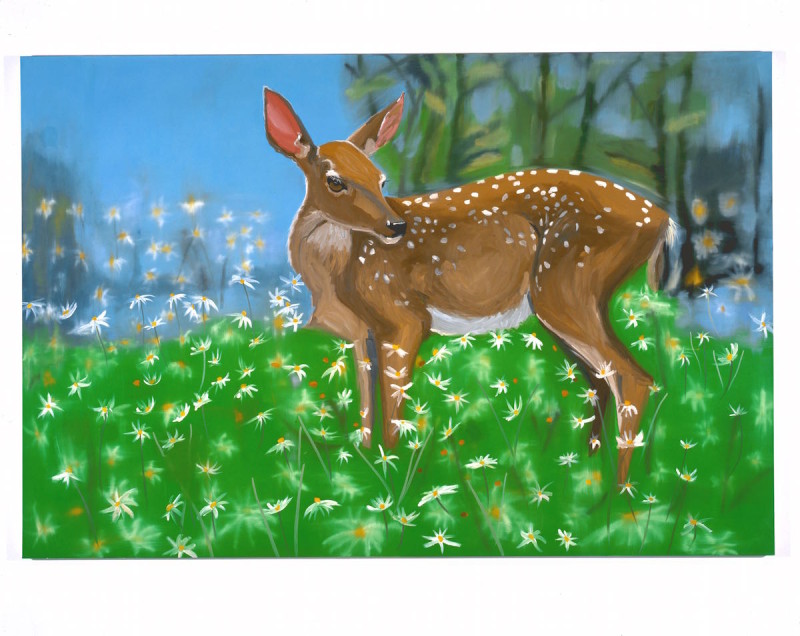 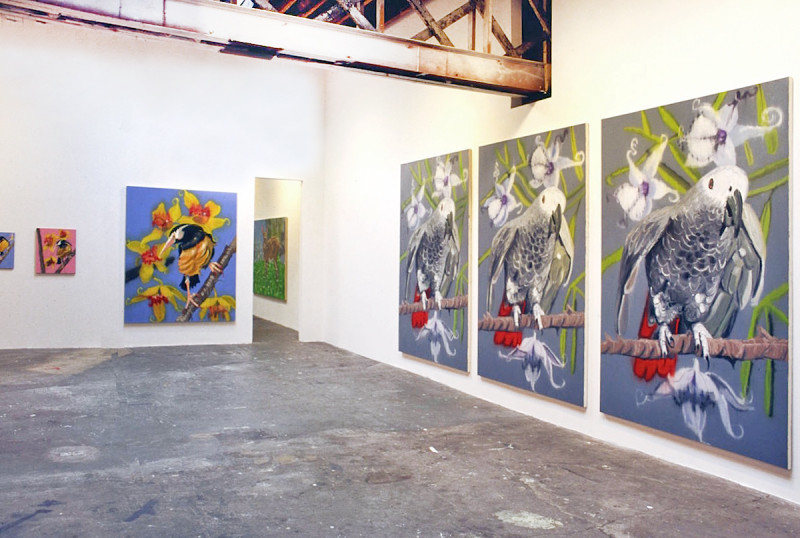 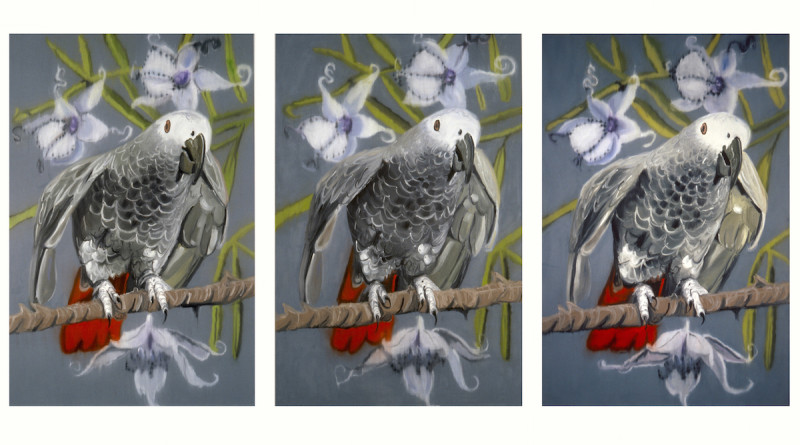 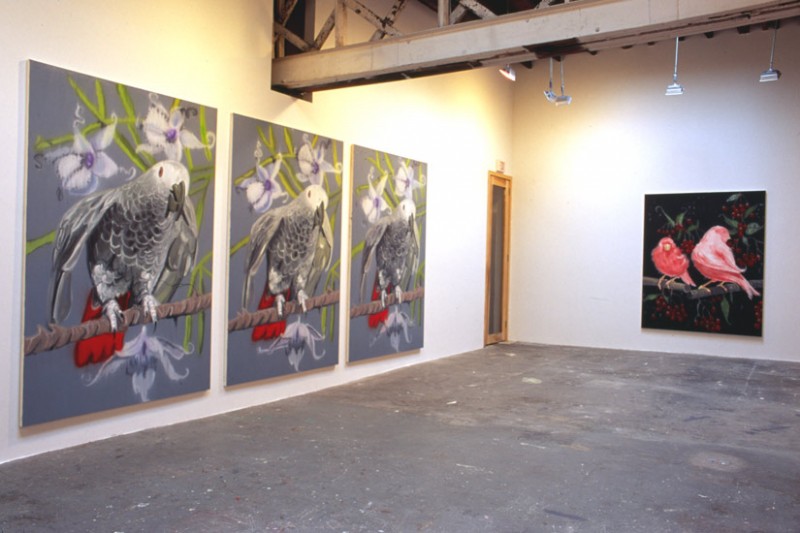 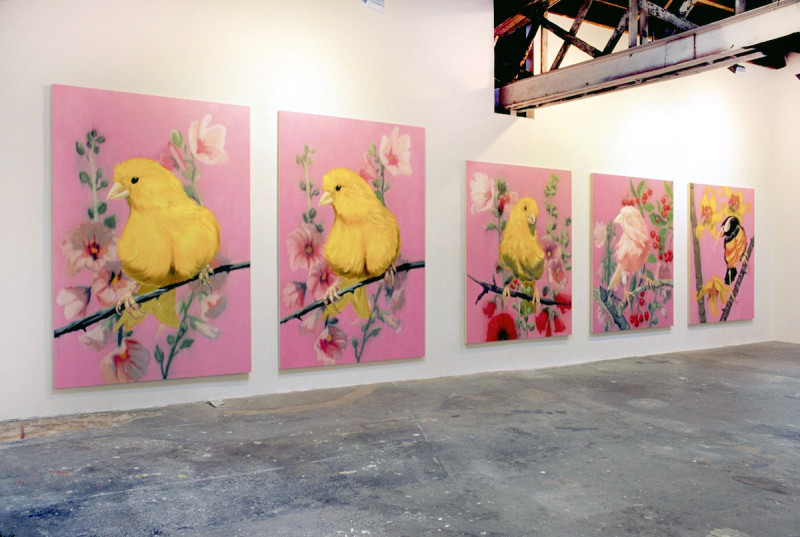 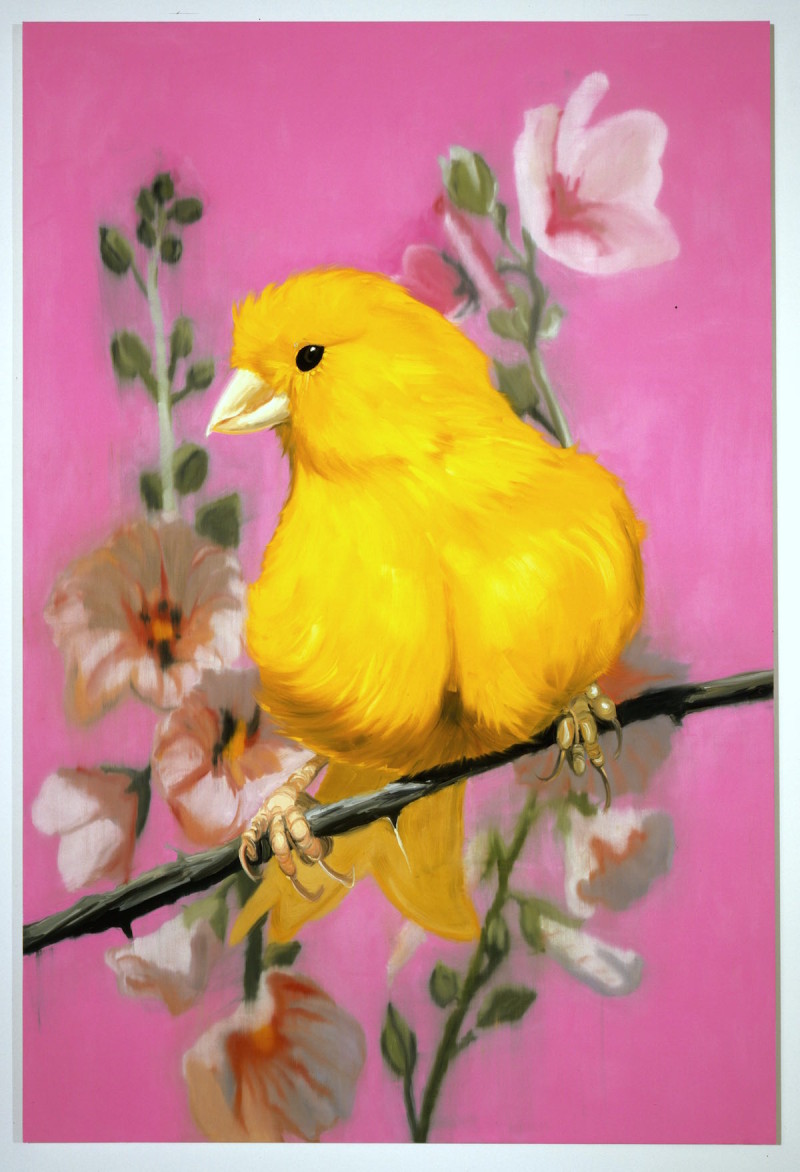 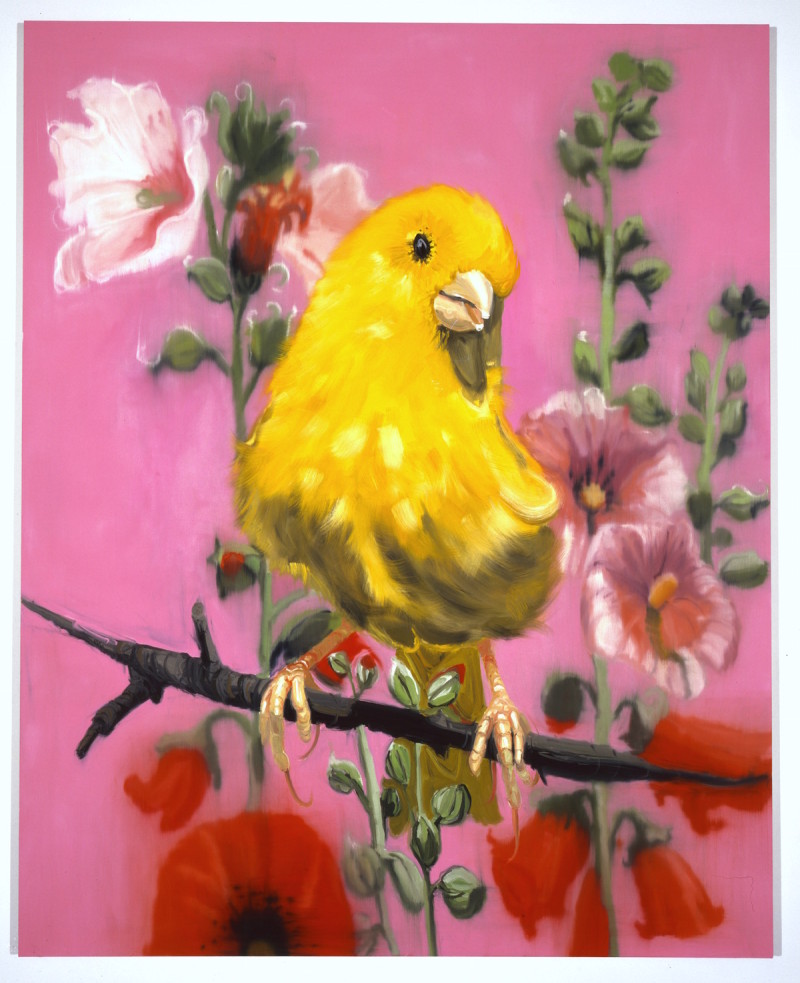 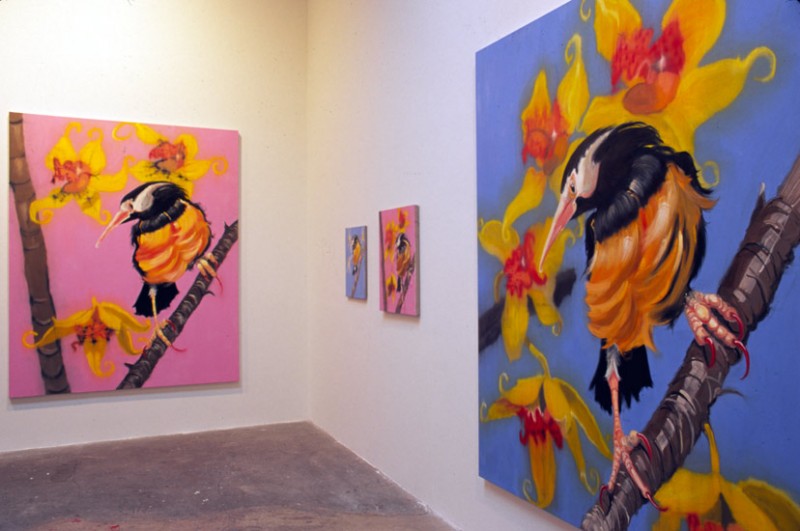 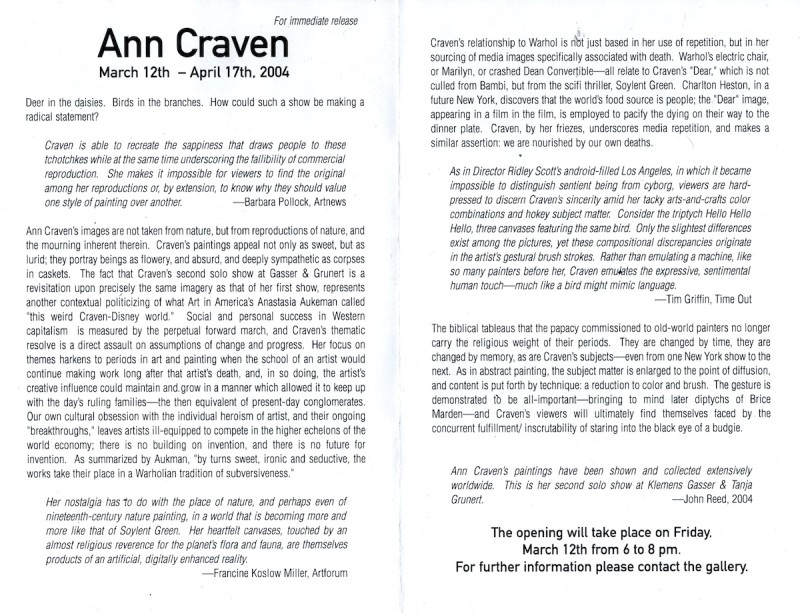