Ann Craven is a painter living and working in New York City. She summers in Cushing, Maine.

Categorically, like the history of the medium itself, Craven’s painting can be divided in two – the iconographic and the abstract. Craven is well-known for her lushly colored, bold, serial portraits of the moon, various animals but often birds, flowers, trees and other iconic images from everyday life.  No less significant are Craven’s series of abstract canvases employing diagonal stripes of color as well as her Untitled (Palettes,) series which serve to both document her process and reflect on the notion of time just past.

Craven has been making paintings of the moon, a symbol of time and memory, since 1995 from varying vistas in Maine and her studio rooftop n New York.  The small oil paintings are sketched from life, intended to be returned to and scaled up into larger works back in the studio. The simple, continuous subject matter gives a nod to minimalist painting, while their economic execution and visible brushstrokes conflate the momentary with the constant.

Craven has been making paintings of birds since the late 1990s, inspired by color-plates found in her Italian grandmother’s vintage ornithology books. Like the moon the birds serve as a touchstone for memory, each repetition of the image a revisiting of a moment, a recalling of loved ones.  Paintings of other animals, flowers, portraits of family and friends soon followed, in the same diaristic deployment.

Each of Craven’s paintings is inscribed with the date and time of its making, and she meticulously inventories and records each year’s work. Afurther kind of archiving comes with each iconographic work’s abstract stripe/banded “sister” canvases, painted since 2002. Craven has said, “My paintings are a result of mere observation, experiment and chance, and contain a variable that’s constant and ever-changing — the moment just past. The stripes are so I can see what I just mixed. The mixing process is a very unconscious progression and so the stripes are a way to list the colors that I just painted. It is a memory and a documentation of the work at the same time.”

Craven’s extensive series of Untitled (Palettes), range from 1999 to present. Painting wet on wet in oils, she mixes her colors on light-duty pre-stretched canvases, storing for future research and color matching. “The Palettes are my indexed color inventory,” she says. “They are a way for me to hold on to what I just painted—a moon or flower or bird. I sometimes tag the top of the palettes with a quick drawing of what I just painted. I always date and title the palettes the same as the paintings that they came from. After that the paint is physically useless. The abstraction in the palettes and stripes informs the figuration in my work, and vice versa, and further brackets how they work togetherin the context of how my exhibitions are conceived and installed.”

Her work has been reviewed in publications including The New York Times, Artforum, Art in America, Flash Art, Frieze, The New Yorker, The LA Times, ARTnews, Modern Painters, among others. Her paintings are in the public collections of: the Museum of Modern Art in New York, The Whitney Museum of American Art in New York, The Hammer Museum in Los Angeles, the Museum of Contemporary Art in Chicago, among others. 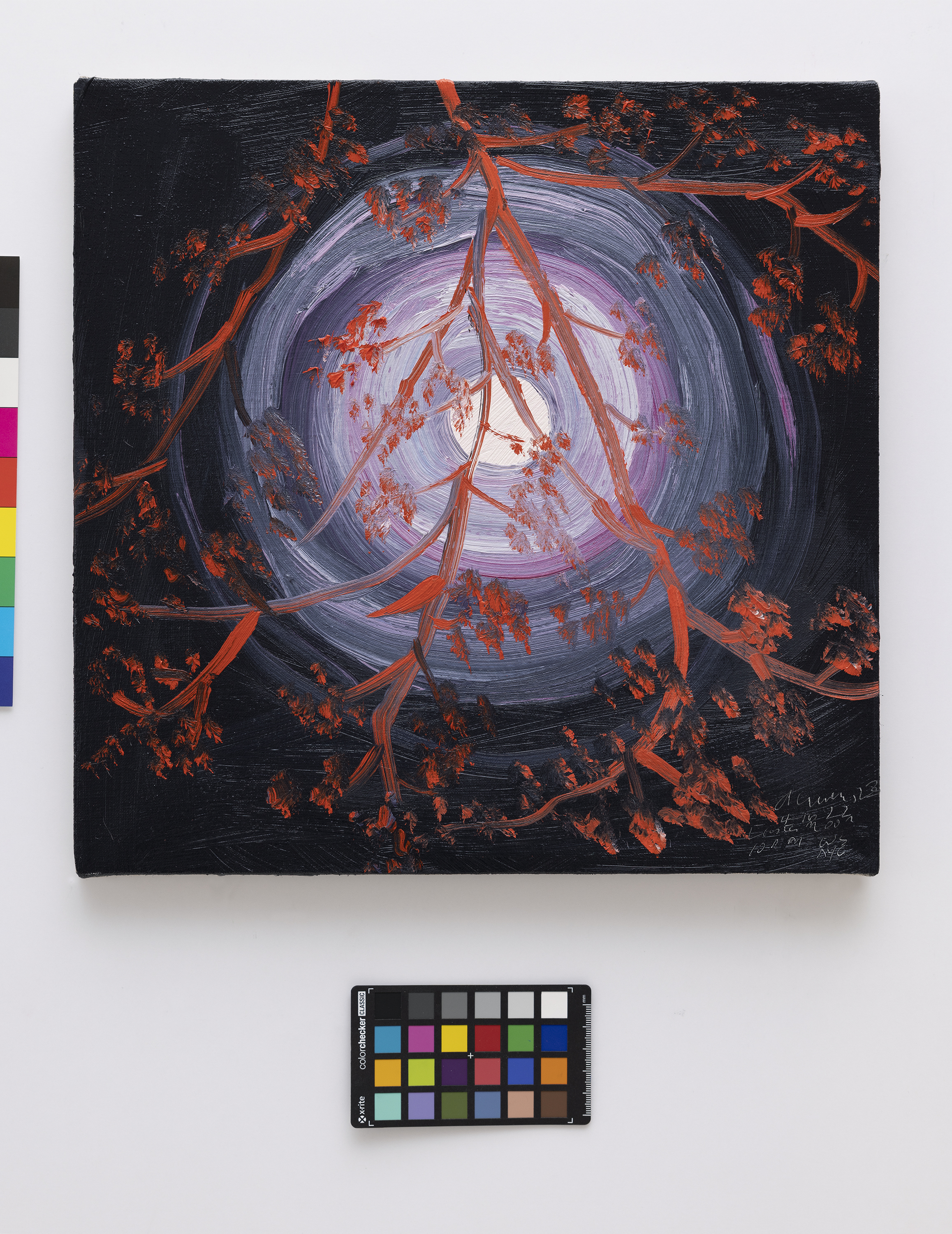